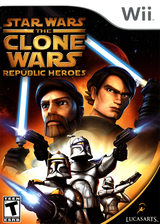 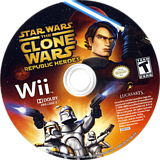 What do you know about the Empire Strikes Back? There are some things that you don't know

After thirty years, three terrible prequels and acres of spin-off material, the "Star Wars" brand has been somewhat tarnished. The fans are still legion, but it's become harder and harder to get excited about the series, and the highlights drift further and further from memory. That being said, we'll always a place for the original trilogy in our hearts, and much of that comes down to the second (or fifth) installment, 1980's "The Empire Strikes Back" Despite the success of the original, creator George Lucas seemed to have taken some of the criticism to heart, a took a back seat for the follow-up, handing over the directorial reins to his old film school professor Irvin Kershner ("The Eyes of Laura Mars," "The Flim-Flam Man") and hiring veteran screenwriter Leigh Brackett and bright young thing Lawrence Kasdan, who'd come to fame thanks to his as-yet-unmade scripts for "The Bodyguard" and "Continental Divide."

The resulting film was a triumph, continuing the serial-esque adventures of the original with all the same sense of wonder and imagination, but deepening and enriching the universe, upping the stakes, and providing one of the great twist endings in cinema. the film was funnier, darker, sexier and more exciting than the original, and still stands as the high-watermark of the series. "The Empire Strikes Back" was released thirty-two years ago today, on May 21st 1980, and became one of the biggest hits in cinema history, and to mark the occasion, we've collected five things you may not be aware of about the greatest "Star Wars" film. Check them out below.

1. Had "Star Wars" not become a blockbuster, we might have seen an entirely different sequel.
No one knew that "Star Wars" was going to become the biggest film of all time, and indeed, before its release, Lucas had a contingency plan for a low-budget follow-up if the film failed to become a giant hit. In 1978, Alan Dean Foster was hired to write the novelization of "Star Wars," but his contract was for two books, and Lucas stipulated that for the second, Foster should write something that could be used as a template for a cheap film sequel, that would reuse props and locations from the original. As the film turned out to be such a giant hit, Lucas decided to go bigger and better, but Foster's second book saw the light of day as one of the first franchise spin-offs (in what fans have termed the 'Extended Universe'), entitled "Splinter of the Mind's Eye," and apparently fits into canon between 'Star Wars' and 'Empire.' The plot involves Luke and Leia crash-landing on a swamp planet, enlisted by an old woman called Halla to help find a crystal with the powers to magnify the powers of the Force, before  a final confrontation in which Luke cuts off Darth Vader's arm in a duel. The book was later adapted into a graphic novel, in 1996.

2. Writer Leigh Brackett and second-unit director John Barry both died before the film was completed.
The film had a troubled production -- the budget went over by almost $10 million, and the shoot was significantly delayed after a stage at Elstree where Stanley Kubrick was filming "The Shining" (which would eventually hit theaters only two days after 'Empire' -- what a weekend that was for movie fans...) caught fire. Indeed, the film took long enough to complete that two key crew members passed away long before the movie ever made it to theaters. After "Star Wars" became a smash, Lucas hired veteran sci-fi author and screenwriter Leigh Brackett, who'd written the scripts for "The Big Sleep," "Rio Bravo" and "The Long Goodbye," among others, to pen the first draft of the sequel. But Brackett was suffering from cancer, and passed away on March 15, 1978, very shortly after she turned in her first draft. Meanwhile, John Barry, who'd been the production designer on the first film (which won him an Oscar) had been picked to direct ill-fated rip-off "Saturn 3" off the back of it, but fell out with star Kirk Douglas, and was fired, replaced by Stanley Donen. Lucas still wanted him involved, and hired Barry as second-unit director for the film. But only two weeks into filming, he collapsed on set -- from meningitis, as it turned out, and died in hospital the next day.

3. John Lithgow once played Yoda, who started out as a frog monster named Buffy.
While most of the cast were simply returning from "Star Wars," there were a couple of key additions. First and foremost among them: Yoda, the wizened, diminuitive Jedi master who teaches Luke in the ways of the Force, who would grow to become one of the most iconic and beloved characters in the whole franchise. But we could have ended up with a very different look for the character. In J.W. Rinzler's book "The Making of Star Wars: The Empire Strikes Back," it's noted that in Lucas' earliest outlines, the character was a "three or four thousand" year old supernatural being called either Bunden Debannen or, believe it or not, Buffy. Later, by the time of Brackett's draft, the character had become 'Minch Yoda,' a small frog-like creature. Even then, the design wasn't nailed down until quite late: the Marvel comics adaptation, at least in the paperback book form, depicted Yoda as a pink-skinned creature with long white hair, reflecting the look of the character at the time work on the adaptation got underway. The final look was inspired famously by Albert Einstein, but also by director Irvin Kershner and the film's make-up artist Stuart Freeborn. And while, Frank Oz is famously the voice and main puppeteer of the character, future Oscar-nominee John Lithgow would also get a chance: the actor voiced Yoda in a 1983 radio adaptation which included most of the original cast (you can hear an extract below). The film's other major new character was Lando Calrissian, which was originally offered to "Alien" star Yaphet Kotto, who turned it down for fear he might become too associated with the role.

4. Despite urban legend, Luke's injury at the hands of the wampa was planned before Mark Hamill was disfigured in a car crash.
The opening sequence on the Planet of Hoth stands as one of the highlights of the trilogy, but the sequence was a tricky one to get in the can. Just as the original movie's shoot in Tunisia was greeted by sandstorms, the crew arrived at the Handangerjokulen glacier in Norway to the worst snow storm in half a century, with 18 feet of snowfall and temperatures as low as -20 °F. Indeed, there was one day where the crew were snowed into their hotel, and the shots of Luke in the snow as he leaves the wampa's cave were achieved by sending Mark Hamill out alone, and filming through the open doors of the hotel lobby. As for the scene that precedes this, popular legend has it that the wampa's attack on Luke was added after Hamill had been in a car crash in the lead up to the release of "Star Wars," to explain the actor's injury. But Lucas claims in his commentary for the film that this is an urban legend: he'd planned the scene long before the injuries. That said, Kershner deliberately avoids showing Hamill's face in full in the scenes leading up to the wampa.

5. Han Solo was frozen in carbonite because no one was sure if Harrison Ford would be back for the third installment.
These days, no would-be blockbuster hires a cast member without locking them into a multi-film agreement, and Lucas practically birthed the practice: both Mark Hamill & Carrie Fisher were locked into three-picture deals from day one. Harrison Ford, however, was less keen, and was keen that Lucas kill off Han Solo at the end of the second film (he tried again with the third film too). Lucas refused, but the twist where Lando betrays Han, who is frozen in Carbonite by Jabba the Hutt, was a way to write the character out in case Ford couldn't be tempted back for a third picture. Not that the actor didn't have some fun: Carrie Fisher relates on the commentary that she was staying at Eric Idle's house in London, and she and Ford had stayed up all night getting hammered with Idle and the rest of the Monty Python crew and some of the Rolling Stones. As a result, both she and Ford were still drunk (and noticeably cheerier) when they filmed the arrival in Cloud City the next morning. The freezing of Han wasn't the only plot twist, of course, with Darth Vader's reveal that he is Luke's father being one of the most famous twists around. And it was kept so secret that even the man in Vader's suit, Dave Prowse, didn't know: the script said that Luke's 'No!' was in response to Vader telling him that he killed his father, and only Lucas, Hamill, Kershner and James Earl Jones (who voiced Vader) knew the real secret, which was added in ADR.
Publicado por Lord Serer en 17:22 No hay comentarios:

Don't know if steampunk's your cup of tea, but these are some killer art pieces. Feel free to add more SWSP

Found some more, this time by artist Tom Hodges. I really like his take on Han and Chewie (Chewie in a suit... suits him!) and his Luke Skywalker: 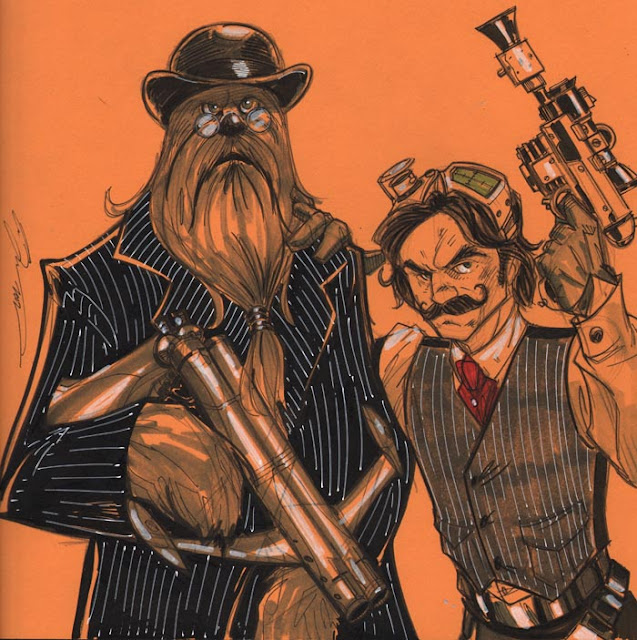 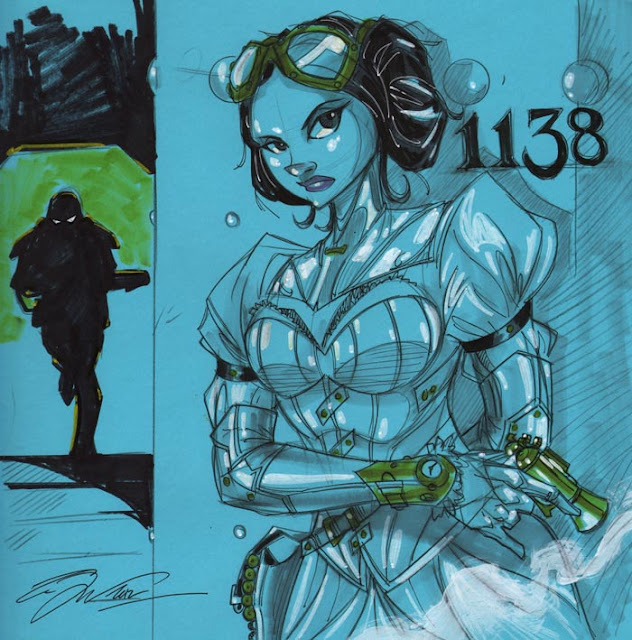 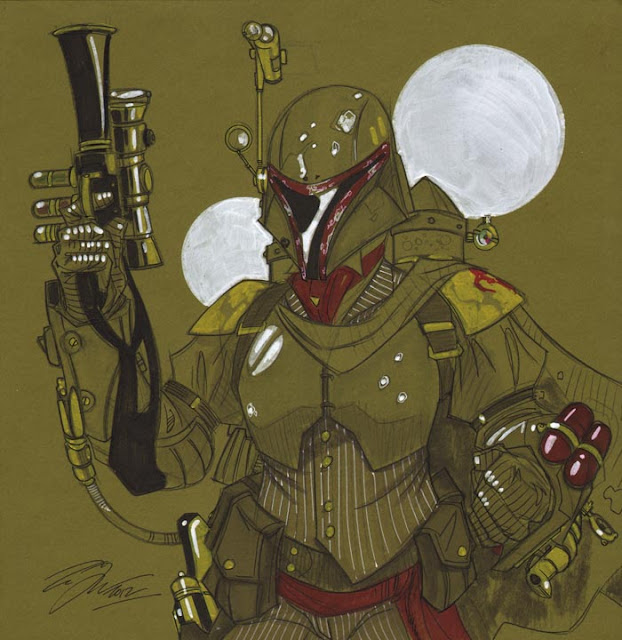 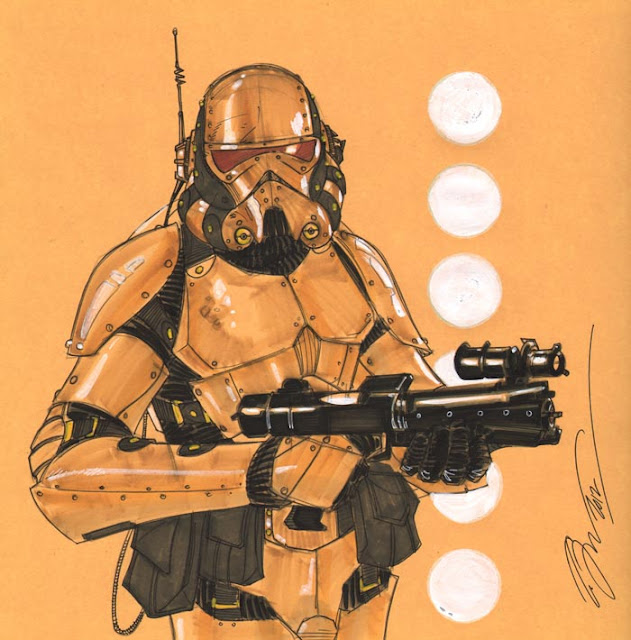 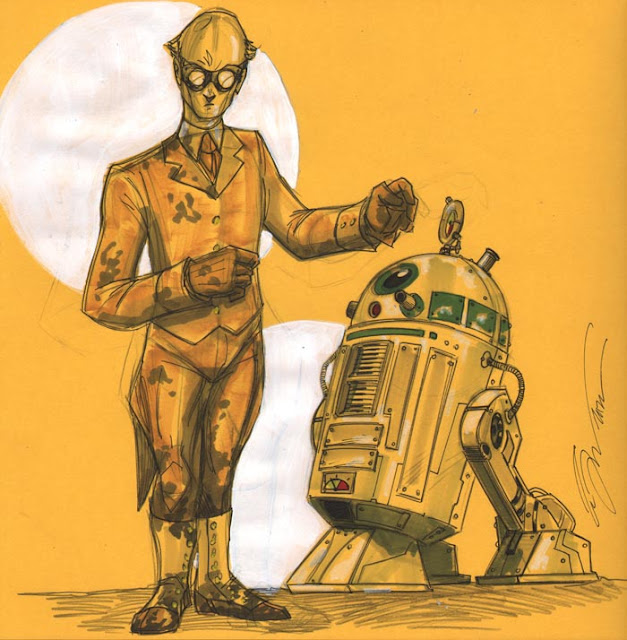 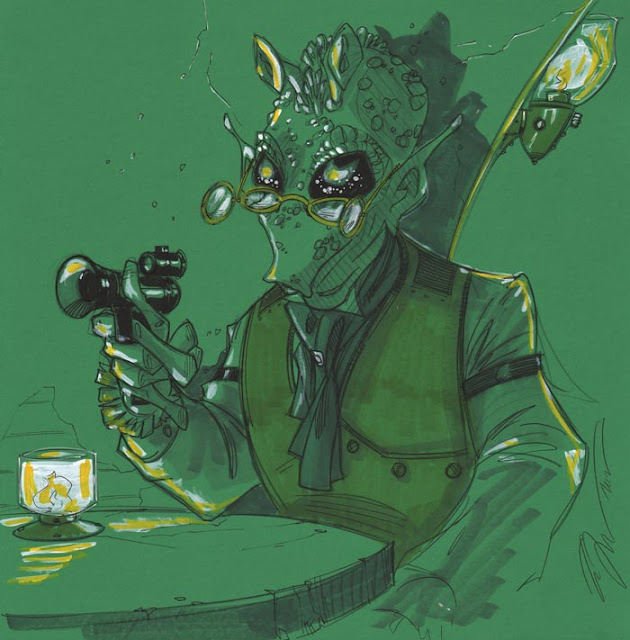 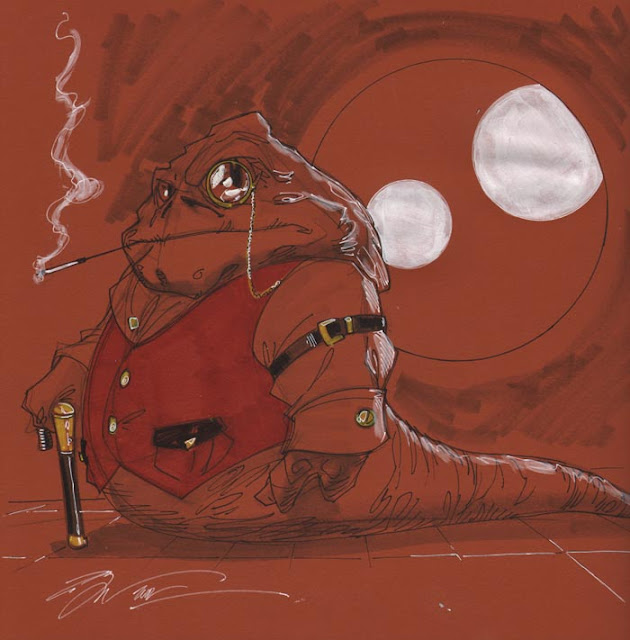 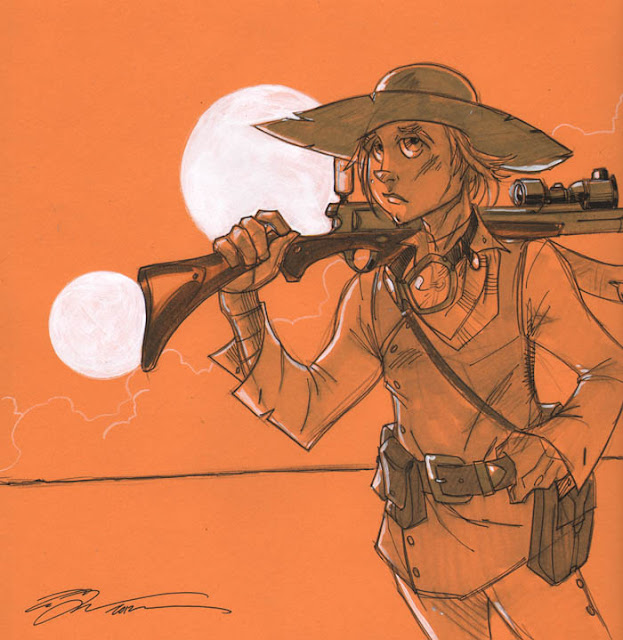 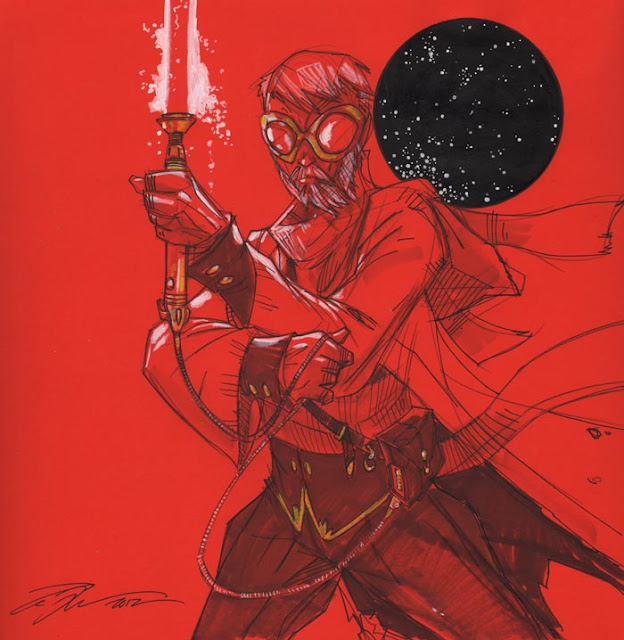 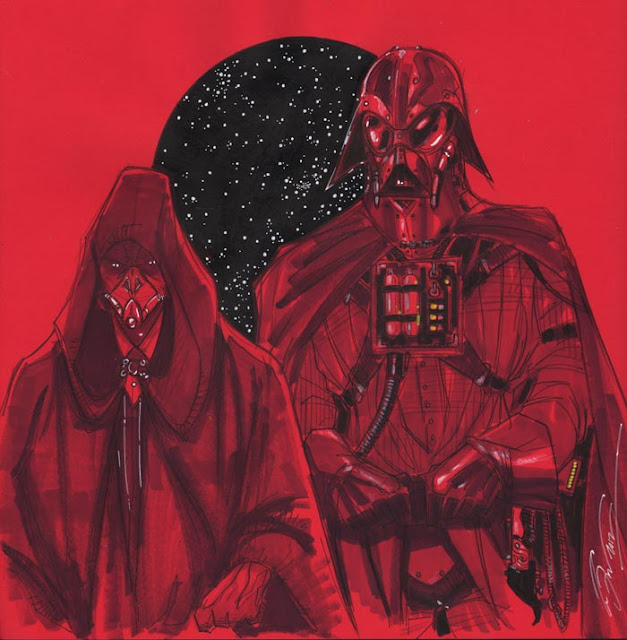 His art is a bit less extreme compared to Hurri and feels a bit more like a Western take on the GFFA. Still pretty cool imho.